“We always thought Maureen had no film in her camera, she was constantly taking a photo, on and off stage..”

A photo paints a gazillion words. During my all too brief spell in the PiL bass slot, Maureen Baker was a regular presence in the PiL camp. She always had a camera pressed against her face whether we were on stage or off. Constantly documenting that weird PiL chapter when the band were based in New York in 1982/3, Maureen took some extraordinary shots, capturing some powerful and illuminating images of all four of us.

I saw very few of these until about 10 years ago when Maureen made contact again and was willing to share what she had in her cupboard. Even now, I occasionally get sent a shot I’ve never seen before such as this one of me and  Keith Levene taken in San Francisco.

I have no recollection of what it was that Keith and I found so funny, perhaps he was laughing at my hat, but it goes to show, perhaps it wasn’t all doom and gloom back then. But look at this next shot; again, not seen by me until this week. It seems to tell a different story?

I can’t remember where this was taken but I’m reliably informed that it was in Chicago and we were bored to tears it waiting for a TV crew to do their stuff. It seems to be at a soundcheck, and tells a different story. I don’t think I have ever seen a picture of myself looking more unhappy than here. But, I could be putting on a pose for the camera. We were constantly goofing about and if we knew the camera was on us would often ham it up.

You decide. Which is the real me? Answers on a postcard please…..

Maureen had an exceptional talent back then and with unprecedented access built up a wonderful collection of photos of that era. Her best work in my view are the candid shots when we weren’t aware of what she was doing, they should really be in a gallery or at least, in a book.

“Stunned is a fucking understatement..”

The news this week that Heavy Drapes lead singer Gary Borland had suddenly and quite unexpectedly passed away after a suspected cardiac arrest has left the whole punk family deeply shocked and stunned. Heavy Drapes had just appeared at the weekend Amsterdam Rebellion Festival where by all accounts he and the band were on fine form. The pictures posted on Facebook certainly show him and his mates having a great time, doing what they loved, giving it large and there was certainly no hint of the tragedy that was to come just a few days later.

I met Gary at the Blackpool Rebellion festival last year in the artist’s bar where we had a  beer and a great all too brief chat. I’m not going to be a hypocrite and say I was a great fan of the Drapes, though I totally got what they were about, Gary knew this and he was just as frank in return but we had a common thread of honesty that was quite refreshing for both of us. I asked him if the new album was finished yet (it wasn’t) and what his plans were going forward. He told me his plan was to get the album finished asap and gig as much as possible and when I asked what he hoped the album would achieve he said without hesitation “Top 30”. I laughed, but he was deadly serious, and for me this typified what Gary was about; he had a belief in what he was doing with a passion and was aiming for a bar that he had personally set very high.

All too soon, this opportunity was taken from Gary and the band. Their  work wasn’t finished, it had only just started. The band had made an impact on the punk scene, a scene that has often been described as a bit stale of late, but the Drapes were trying to smash that apart and they had won over many friends in a relatively short period and played some great gigs with more decent slots planned. Gary had an infectious belief in his art, and enough bluster and bravado to not give a fuck about what anyone thought, they were gonna take over the world one audience at a time…. As Punk as fuck.

Gary will be sorely missed by his family and friends for ever, I for one will miss his presence, attitude and of course, his snarly vocal delivery. Punk has lost one of the good ones. RIP mate.

I went to see the new Public Image Limited documentary ‘The Public Image Is Rotten’ last night at the Odeon with my good friend and musical collaborator Andy Trussler (Rogue Sector). It was an interesting evening. As usual, the trains in and out of London on the Thameslink have gone to pot so I decided to drive up (20 miles) which was dead easy given it was a quiet Sunday evening. Plenty of parking to be had a short walk away from the venue.

Screen 3 was fairly small, cosy I guess, and I was given a complimentary VIP seat (which is just what a normal cinema seat should be like when in actual fact all the standard seats are too small). The documentary itself is a very good chronological account of the entire PiL history from  it’s inception up to the present day and there are some interesting characters interviewed in it.

Of course, I’m in it for a bit when the film moves on to the New York segment and I am very pleased to say I wasn’t made to look a big chump in the editing suite. It’s bizarre seeing yourself up on a big screen like that, a 6 foot wide head is not a good look for anyone! It was good to see my old mate Martin Atkins on screen, he was very funny and I miss him.

There were a few people I knew in the audience which was nice. There was also one or two people there who I didn’t really want to see and I even  had a bit of a confrontation with one of them but it soon settled down. The film was a tad too long I felt, could have done with shaving off a few minutes. It was good to see they had also used some of my personal photos from that era.

John Lydon held a short Q & A after the film but I couldn’t face listening to him spout on about the same old shit so I left. His wife Nora was there so it was a shame I didn’t get to say hello to her. She was great fun back in the 80’s when we were all living in NYC, a lovely lady, though I have no idea what she saw in John!!

I will be seeing PiL perform at the 100 Club on the 20th June, that should be fun, to see how much of it I can stand!!

See ya next time!! PjJ

Nice ‘n’ Sleazy at Morecombe was the first Department S festival date this summer. It was competing with Strummercamp not many miles away but despite this, it was very well attended and good to see number of friendly faces there to support the bands. There was a danger of the venue running out of beer at one point, such was the raging thirst of the punk mob. Luckily, emergency supplies were sent for and all was well.

It was a bit of drive (4 hours) for such a short set but a promise of a bed for the night at our guitarist’s house made it worth the trip.

A great night all round, The UK Subs were on fire as usual and it was nice to see our vinyl on the merch stand getting noticed.

“That was a wonderful noise….“

The 100 Club is an iconic London venue that’s great place to play but not so much fun as a paying punter. The stage has seen some classic performances over the years and it was a pleasure to go there last night along with our lovely Department S drummer Alan Galaxy to see Eric Goulden perform his one man Wreckless Eric show. Just him and a guitar. It was a very powerful and engaging show; Eric has some great tales to tell and songs to match and the sound he got form his acoustic through a variety of effects was immense. ’twas a great night all round. I even bought his CD!

Of course, you can’t go to the 100 Club without bumping into someone you know and it was great bumping into the mighty Leigh Heggarty from Ruts DC and some old mates form years gone by that I hadn’t seen for a while. The only downside was getting home again thanks to Thameslink messing up the trains but standing up all the way back to Harpenden  was worth it. Go see Eric if you get the chance, its a refreshing change. 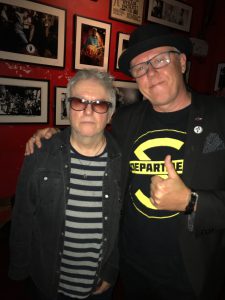 Now, its a quick cup of tea and back in the studio to work on my new solo album. Perhaps I should get the acoustic and Big Muff out to play with!!

“Our host seemed a bit unhinged to me….”

We had a great 3 days residential studio  rehearsals  in deepest Leicestershire over the weekend. Fantastic place to play with a great host who cooked the breakfast, decent pub nearby for tea. Recommended for residential rehearsing and recording. Ross, the guvnor, is great.

We managed to miss the royal wedding shenanigans thank god. Worked up three new Departments S songs ready to be unleashed on the public soon.

Phil had a problem with the hammock though:

We are having a rehearsal away day, well, an away three days actually.

We’ve been working hard over recent months writing new material. It has been proving difficult getting enough rehearsal time to knock the new songs into shape. So we have decided to lock ourselves away for three days at a residential rehearsal rooms in deepest Leicestershire. It’s near where they make the Melton Mowbray pork pie. Here we can make as much noise as we like 24 hours a day and nobody will hear the screams when the fighting breaks out.

Wish us luck! last man standing gets the beers in.

A week of rehearsals for us this week to gear up for summer gigs. Why not come and see us? #gigs pic.twitter.com/xhGqjVWOo6

Yes, I’ve bitten the bullet and designed a new website for all news and stuff about me, Department S and any other project I’m working on. Let me know what you think.