It is with a moist eye that I announce I shall be leaving Department S in 2019.  After more than four years and 100 or so gigs, I feel the time is right to move on and consider other projects going forward. The decision is mine alone and one I’ve been wrestling with for some time – I really do love those boys and will greatly miss their humour and professionalism – but artistically, I felt I had done all I could and I need now to face a different challenge.

I’ve had a great time working for this seminal band and I am very proud of the shows we played at and the recordings we made. The marvellous people I’ve met along the way, many of who have become true friends, made the not so glamorous gigs bearable and the bigger shows some of the best I’ve ever had the pleasure to play. We’ve had some right laughs, not least of all with my roommate Phil Thompson who has become a great friend and one of the few people I can stand sharing a hotel room with! 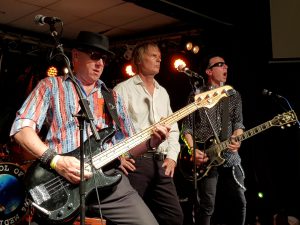 I aim to leave the band by the time of Rebellion Festival in August so in the meantime, if you want to come along to any Department S shows to say goodbye and weep uncontrollably on my shoulders, please do. Department S will continue with a new, as yet, undecided bass face and I wish him/her all the best with the band.

I am not retiring from making music; my new album and book will be out next year and I am hoping to have some exciting news to announce regarding a new musical project. Watch this space. I am also hoping to tie up with Martin Atkins on his book tour next year following our successful appearance at the Islington last month. I will of course, still be available to work in my producer role with other band’s music in my newly refurbished studio.

Is Vic There?… I don’t know, but I never found him despite four and a half years of looking.